If we look at a few belief systems then we can begin to have some fun, because if we believe in a particular way, then it clearly starts shaping and defining the reality we find ourselves in.

Here are a few versions of a well known theme: CREATION

Once upon a time the One (God) decided to create the World.

Humans were created as souls in the image of God.

Humans were at first inside Eden/Kingdom of God, but managed by their own actions to become excluded.

We have since called ourselves sinners and have struggled to find ways to re-enter Heaven. Most of these ways include belief in a religion. In most religions some people are more holy than others all the way to ‘incarnations’ or ‘sons of God’. If we believe in this and pray to these holy beings we too can get access to heaven, though mostly not until we are dead!

Once upon a time some very powerful aliens seeded life on planet Earth.

After millions of years of evolution some different aliens took some DNA from a humanoid creature and mixed it with their own. They then turned off most of the DNA that had to do with insight and supernatural powers. The result was Homo sapiens, a being made in their image but consciousness-wise ‘thick as a brick’. This human could then be manipulated by the aliens for their own means. This manipulation is still taking place and this is the basis for various conspiracy theories that states that some people know what is really going on while most of us don’t.

The Prime Creator (God) continuously creates and continuously guides the various creations towards higher states of being. We are created in the (trinity) image of God (I Am Presence, Soul and body). This means that we are special and more precious that all the other creations. And because we are special it is our job/destiny to develop higher and higher levels of consciousness until one day we are co-creators of the universe (or maybe we will get a universe of our own).

The understanding of the Cosmic Laws and the practise of opening our consciousness through whatever means necessary (meditation, singing, mantras, dancing, drugs, sex etc) will gradually open us up to the wonders of the universe and we will step through the different levels of the Hierarchy until we reach cosmic consciousness. There are different thoughts as to whether this can be obtained by Will (occultism) or it can only be obtained by Love/Devotion (sainthood).

Advaita means One (non-duality) which indicates that there cannot be two, never mind three or more. Our sense of being separate entities is based on a misunderstanding. We live in a dream state where we, like when asleep, act as if we have real bodies in a real world. If we wake up from the dream we will clearly see that we are consciousness itself and as consciousness we will recognise that there is only One and I Am That. That will not change anything but it will clearly change our perspective. The terms Enlightenment and Awakening are often used to point towards the awareness of non duality. In the non duality view everything is perfect as it is. Things appear and disappear. Happiness and sadness are two sides of the same coin. But there is only one coin. So even though life seems to have opposites, these opposites could not exist without each other and as such they are part of the same unit. The only obstacle to this awakening is the belief that we are not awakened and that there is therefore somewhere to go, something to strive towards or something to develop into. The second we understand that we have always been consciousness itself, at that moment the illusion of being separate falls away and we are left simply as consciousness. 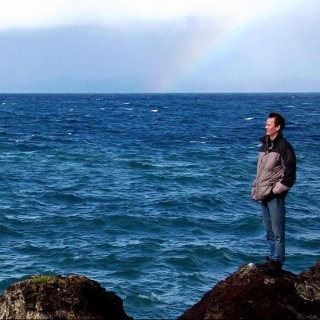